Everything to Know About Knobby Starfish

Most of us know absolutely nothing or just a little about Knobby starfish. These beautiful and widely colored creatures are no longer common on shores. They cannot live for too long when out of the water, and they also use it pump up their bodies.

Where are they mostly seen?

These large and colorful marine creatures are mainly found in the oceans. The red knobby starfish species live in the Indian Ocean, in the area around Indonesia, the Maldives, and Africa. They live on sandy or muddy sea beds, where it is easier for them to hunt their prey and forage for food. Although they are also seen in shallow tidal pools, they can reside at a range of depths of 100-foot-deep reefs. 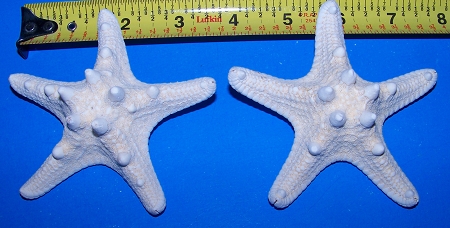 What are their key features?

The body of a Knobby Starfish is calcified and therefore is hard and heavy. Tiny finger-like structures, called papulae, are seen on the upper side of the body when they are submerged. It has long tapered to rounded tip arms that are triangular when cross-sectioned. Their arms are flexible enough, however, may not appear so.

The single row of knobs on the upper side of the arms is used for the identification of this species. The color, shape, and number of knobs vary depending on the starfish's body structure. The sucker shaped tipped tube feet emerge from under the arms. These can be either red or purple in color.

The most common color of Knobby starfish is red, orange or brown. However, you can encounter white, pink, blue, or green starfish also.

Knobby starfish may look dangerous because of the brightly colored knobs, nodules, and spines. But the fact is that they are not venomous.

What do they eat?

According to several reports, they eat scavenges on dead creatures and other micro-organisms. However, there are some other reports which state that feed on sponges, clams or snails. It is also said that the knobby starfish hosts shrimps, scale worms, harlequin crabs and sea star crabs. Parasitic snails are also counted sometimes.

What are their current status and threats?

Knobby starfish are harvested from the wild for various purpose such as for the live aquarium trade, or for selling in a few dollars. They are unlikely to survive long without proper and expert care.

A few years ago, Knobby starfish were counted amongst the most common large starfish species of Malaya. But the truth is that they are now considered as an 'Endangered' species on the Red List of threatened animals of Singapore.

At North Florida Shells, we offer an extensive range of best-quality sea creatures that includes Knobby starfish. You can get a wide variation in sizes, colors, and shapes as they are naturally extracted from the environment. We also have hermit seashells, urchins and much more!

So, if you want to buy a Knobby Starfish for yourself, then visit our online store!